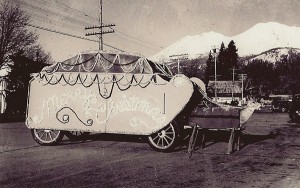 It has been a Christmas tradition in Mt. Shasta for the Firemen’s Association to construct a float and sleigh so that Santa Claus could parade around town and greet the children, talk with them, and give them a candy cane. Earl Bassett, a long time resident and past fireman, remembers a Santa float in 1944 and did not think there was one prior to World War II. Louie Melo, also a past fireman, recalls that the float was initiated prior to World War II. I can only say that the tradition started in the early 40s and only Santa Claus knows for sure when it truly began.

What we know is that the first Santa float was built by Mt. Shasta City Firemen and was powered by the 1915 Model T Ford fire truck called Lulu Belle. Plywood shaped like a sleigh was attached to both sides. The top had a dome shape and garland strings were draped around the float. Two wooden reindeer with real mounted buck heads (yes, real deer heads!!) were attached to the front. Their legs were made of fire hose and would flop as they traveled. 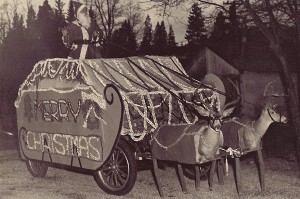 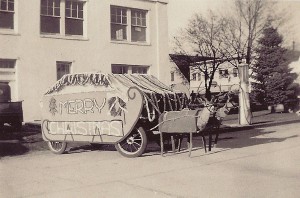 Through the years, the float was changed slightly with Merry Christmas written differently on the sleigh sides, runners painted on the sleigh bottom, and additional garland decorations were added. The float driver was Frank Melo, and Santa was Joe Melo, holding the reins to the reindeer. When the Santa float paraded around the city streets, Santa’s helpers, dressed in elf suits, assisted the children to see and talk with Santa. The Santa and elf costumes were made by Elizabeth Melo, wife of Chief Frank Melo. One year the Veterans of Foreign Wars (VFW) sponsored the float. 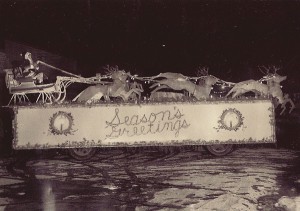 In 1949, a complete new float was built by the fire department. It is believed that the float was built around the 1935 Chevrolet fire engine. A deck was placed on top of the truck with plywood siding painted white. Nine fabricated reindeer with real buck horns were attached to the top deck. A real sleigh was placed at the back for Santa Claus to ride in as he held the lighted reins to the jumping reindeer. The sides were painted white and framed with lighted garlands along with two lighted wreaths on each side. It is believed that Joe Melo was Santa, and Frank Melo was the driver. This Santa float was brilliantly illuminated and was considered at the time to be the most beautiful of their floats. It was so well liked that the Dunsmuir Fire Department asked if Mt. Shasta would bring the float and Santa Claus to the City of Dunsmuir to be displayed at the foot of Dunsmuir’s Municipal Christmas Tree at Florence and Pine Streets. The firemen agreed to do so. This float was only used for one year.

In 1950, a complete new float was constructed on a flatbed trailer. It consisted of three individual wood construction houses painted white. The same nine reindeer were mounted so that they were jumping from roof top to roof top. Santa Claus sat and stood within a simulated sleigh behind the reindeer and the reins were made of garland material. The float was pulled with a World War II tug tractor with an A frame roof, and it was driven by fireman Frank Coppi. Santa Claus paraded the city streets as usual except on a Saturday the float was parked in front of the Shastona Theater (currently the Elks Lodge) so that children could see and talk to Santa. The theater sponsored a matinee for the children so the parents could shop at the local stores. Santa Claus was Joe Melo (below, left.) Donna Brooks and her daughter Dawn look at Santa’s float (below, right.) 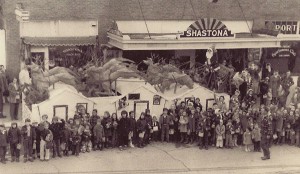 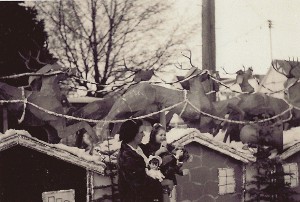 In 1951, using the same float, the Fireman’s Association decided that there should be a Mrs. Santa Claus on the float with Santa. The first Mrs. Santa Claus was Carol Minoletti (Carol Boss) in 1951 and 1952. Bill Walden was Santa. The elves were Lee and Wally Barlow. The Mrs. Santa’s costume was made by Mrs. Gardner, and her daughter Loretta, was Mrs. Santa Claus in 1953 and 1954. It is believed that Helen Melo served as Mrs. Santa Claus after 1954. This Santa float was used in 1959. In January of 1960, a severe snow storm collapsed the building that the float was stored in, which damaged the float beyond repair. 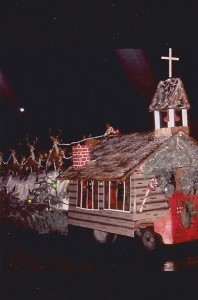 During the year of 1960, the Firemen’s Association built a new Christmas float. They built a wood structure that looked like a church with a bell tower and cross on the front of the roof top. A fire place chimney was placed at the rear of the roof top. The building was built over a World War II airport tug tractor, again driven by Frank Coppi. At the rear of the church building was a trailer with reindeer and Rudolph wore a lighted red nose. The reindeer were mounted on a snow covered deck with fir trees on the corners. Fir tree boughs were placed along the sides of the float. A trailer sleigh was attached for Santa and Mrs. Santa to ride in. By this time Santa’s elves were in need of new costumes. In 1965 Mary Lamanna made new costumes for the elves. They also needed some lively Christmas music on the float to create a joyous atmosphere. Ned Boss collected Christmas music and prepared a long play cassette tape. With the help of the local Radio Shack, they installed up-to-date playing equipment and outside speakers. This float was used until December of 1973, and it was retired because of its poor condition. From my research, I found that Joe Melo, Bill Walden, and Frank Scott were Santa Claus during this period. The only Mrs. Santa Claus we can find record of after 1954 is Helen Melo, Pat Barnum, and Helen Walden. 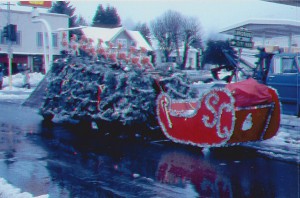 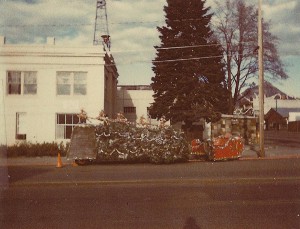 In 1974, The Firemen’s Association decided to build another Santa float. Joe Spini was appointed float chairman and he and his committee choose to use the 1935 Chevrolet fire engine again. Fireman George Riccomini provided a space at Bruno’s garage to build the float. They designed a structure that could be removed from the truck and stored for future use. The float framing was made of wood and wire mesh. Each year, they would cut fir trees and boughs to attach to the wire mesh on both sides of the truck. Garland material and colored lights would finish the side decoration. Nine reindeer, plus Rudolph, were placed on top of the truck bed. An A frame roof was placed over the truck cab. The decorated sleigh was pulled behind the float. From this time on the City Fire Department volunteers would re-assemble the float each year before Christmas. Fireman Ned Boss was the float driver. Santa was Hotch Aquila, from 1774 through 1981, and Mrs. Santa was Jan Sousa who made her own costume. In 1982 John Lamanna became Santa Claus and Jan Sousa continued to be Mrs. Santa. Jan retired at the end of 1982. There were approximately five elves to help Santa, and in 1980, Frosty the Snowman (Larry Beckby) and two clowns joined the cast. 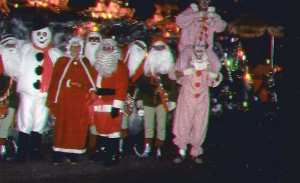 1982 was the last year the above float was used. Fireman and float chairman, Mike Workman said the float framing had deteriorated, and the old 1935 fire engine was wearing out. He said the Fireman’s Association was starting a fund drive to collect around $3,000 to build a complete new float! The fund drive was successful and a new float was built in 1983 by Mt. Shasta Fireman’s Association members. 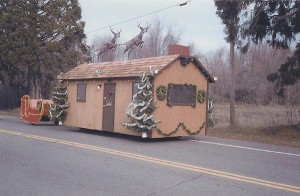 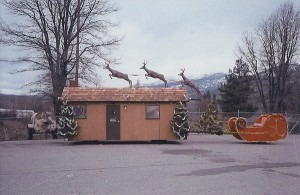 The float was 20 feet in length, 8 feet in width, and 11 feet in height. It resembled a small house with a pitched shingled roof, a fire chimney that smoked, doors and windows. The float was built around a retired Dodge Power Wagon Fire Engine. The roof and sides were brown-tone, but the sides were painted green in later years. A permanent tree holder was placed on each corner of the house to hold a fir trees. The trees and eves were decorated with lights and garland. Three life size reindeer were mounted from the back of the roof to about the center. In later years two more reindeer were added to give the effect that the reindeer were going to pull Santa’s sleigh over the house. A new sound system was also added. Santa’s helpers grew to over seven elves, two clowns, frosty the snowman, a walking tree, and in 1986 Larry Beckby was dressed as a reindeer. The walking tree was Bill Pieruccini. Santa was John Lamanna, and Linda Beckby became the new Mrs. Santa Claus. 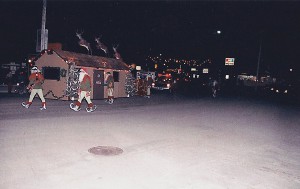 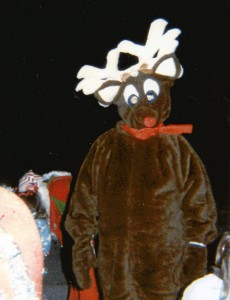 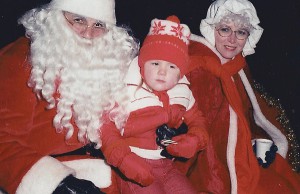 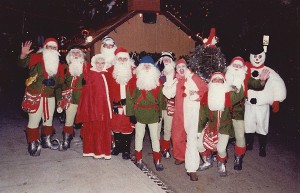 The Firemen’s Association has continued the Christmas tradition of the Santa Claus float throughout the years. In 1989, float chairman and fireman Cliff Bullerwell said the reason the Santa float had been successful was because of the hard work done by the past and present firemen, and the willingness of the community members in Mt. Shasta. Float donation boxes were placed around town and the community was very supportive. Local clubs have also supported the Association with donations for the Santa and his elves. This helped with the costs of preparing the float each year, purchasing of candy for the children, float maintenance, and the updating of Santa and his elf outfits. 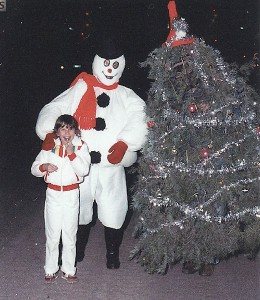 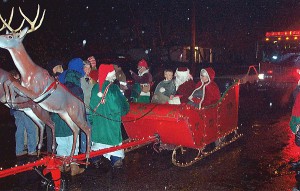 The 1935 Chevrolet Fire Engine was revamped with benches in the back part of the truck around 1980. The truck was used by Santa’s helpers when they needed a rest on long runs around the city streets. Because of the age of the truck, the engine was plain worn out. In 2004, retired fireman Dan Halford and city mechanic Vern Santos replaced the motor. Unfortunately, because the new engine had sat in storage so long, the piston rings were frozen. In 2005, they replaced the rings, and the old 1935 fire truck was back in operation.

Many City Firefighters, Explorers, Association members, and local volunteers have been Santa’s elves over the years. Too many to mention here, but we thank them all!! 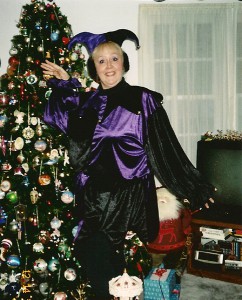 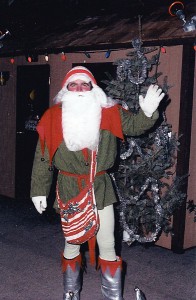 As a fireman for 24 years, I always looked forward to being a part of the Santa Claus tradition in Mt. Shasta. Now, my daughter and her son are part of the tradition. What a wonderful small town we live in! I am sure that all of the volunteers of yesteryear, and the present, feel the same way. We all have many pleasant memories. We thank all those who have generously donated money to the Association collection boxes over the years. The Association does not receive any funding from the City treasury, so all expenses are paid from donations. 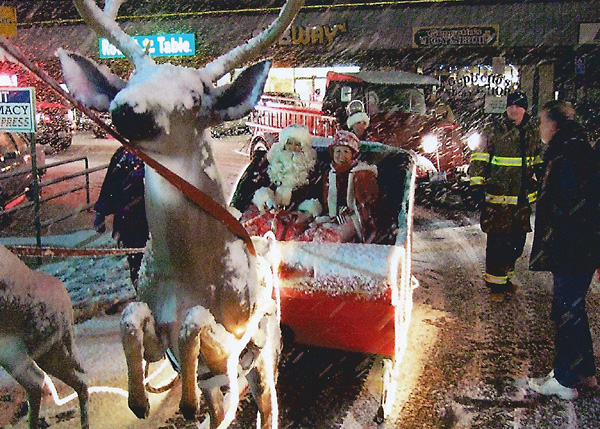 Santa and Mrs. Claus greeting children and people at the Mt. Shasta Shopping Center as the reindeer pull the sleigh through sleeting snow in 2007. Notice the 1935 Fire Truck behind the sleigh.